Cassel Bear has been fortunate to work with Seneca Label since 2012. Based in Cleveland, this family business has been producing quality, custom-printed, pressure-sensitive labels since 1968.

Our first major project had been the development of a new website, which began garnering new clients from across the country. A few years later, growth necessitated revisiting the brand to ensure it was communicating well to a national audience. The scope of the project—a brand reinvention—called for an in-person meeting, rather than a phone conversation, so we sat down with the guys and were amazed at what we learned.

It wasn’t so much what they said; it’s how they said it. They were incredibly funny. Their speech was punchy, forceful, with great energy to it. We heard and felt a level of passion and intensity for what they do that was difficult to catch amidst talk of label sizes, die cut shapes, and fold types. There was a certain Cleveland, industrial, blue collar “pull ourselves up by our bootstraps and get ‘er done” can-do vibe that we found winsome and engaging.

The problem? Very little of this came through their marketing materials. 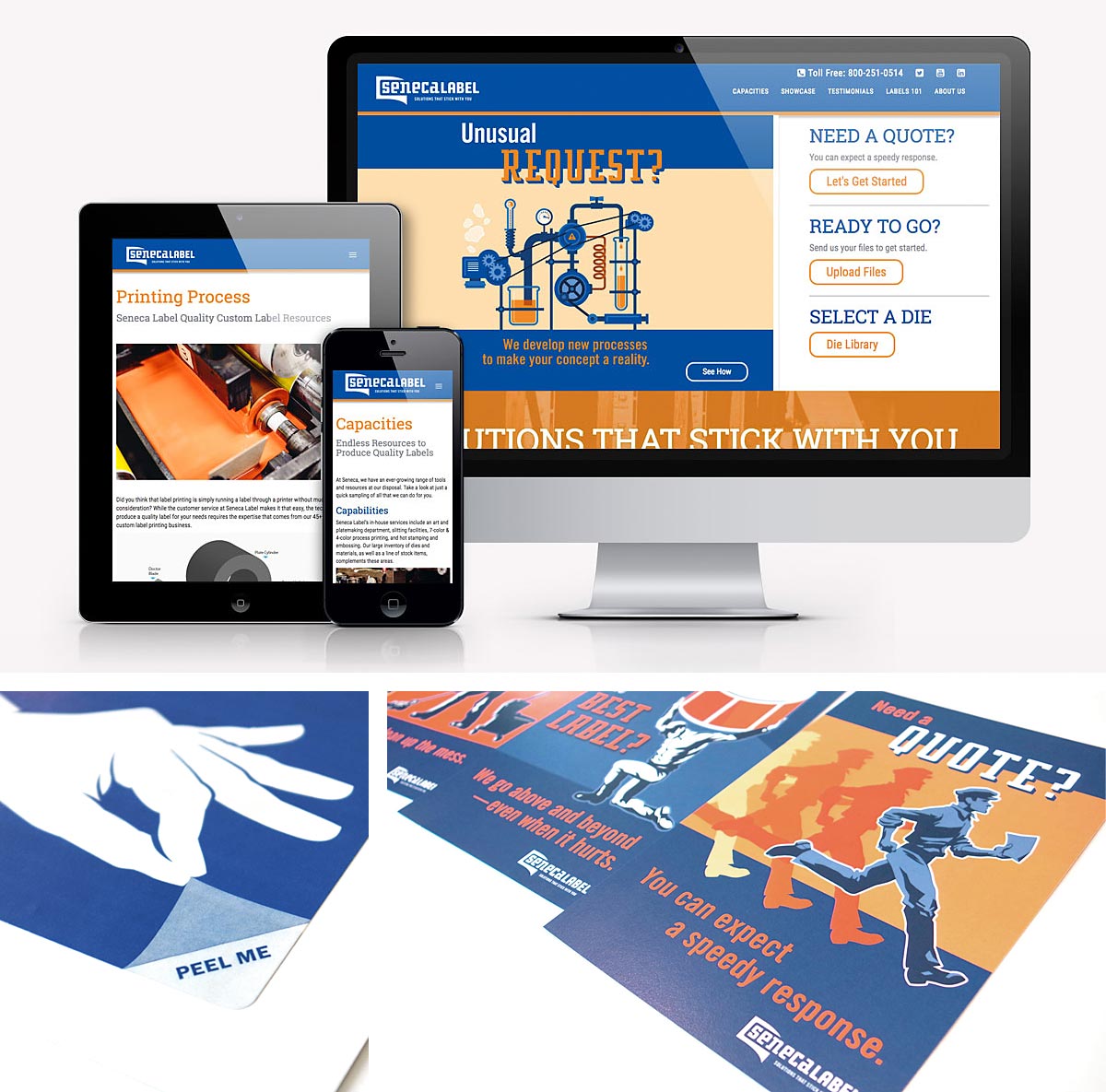 So how to remedy this? We crafted new public-facing statements that convey who they are, what they do, what’s important to them. This might be called a mission statement, a motto, or values, but even something that official seemed unlike them, so we wrote in a voice that embedded that info in the very phrases that came straight out of their mouths:

This newly discovered voice not only informed what the new marketing materials sounded like, but suggested some visual correlatives that allowed our designers to think about what the new brand looked like.

Seneca’s can-do attitude and energy inspired a bolder, more creative design style that takes its inspiration, in part, from WPA-era posters. These posters tended to use clean, flat blocks of color and a strong graphic approach.

Our first project incorporating this style was a series of direct mail cards based on callouts from the new motto statement. We brainstormed illustration concepts to match each of the five bullet points. Once a preliminary sketch was determined to have merit, a quick digital mockup was created and sent to the client for review. As these sketches were approved, they were refined and used as a basis for final pencil drawings. 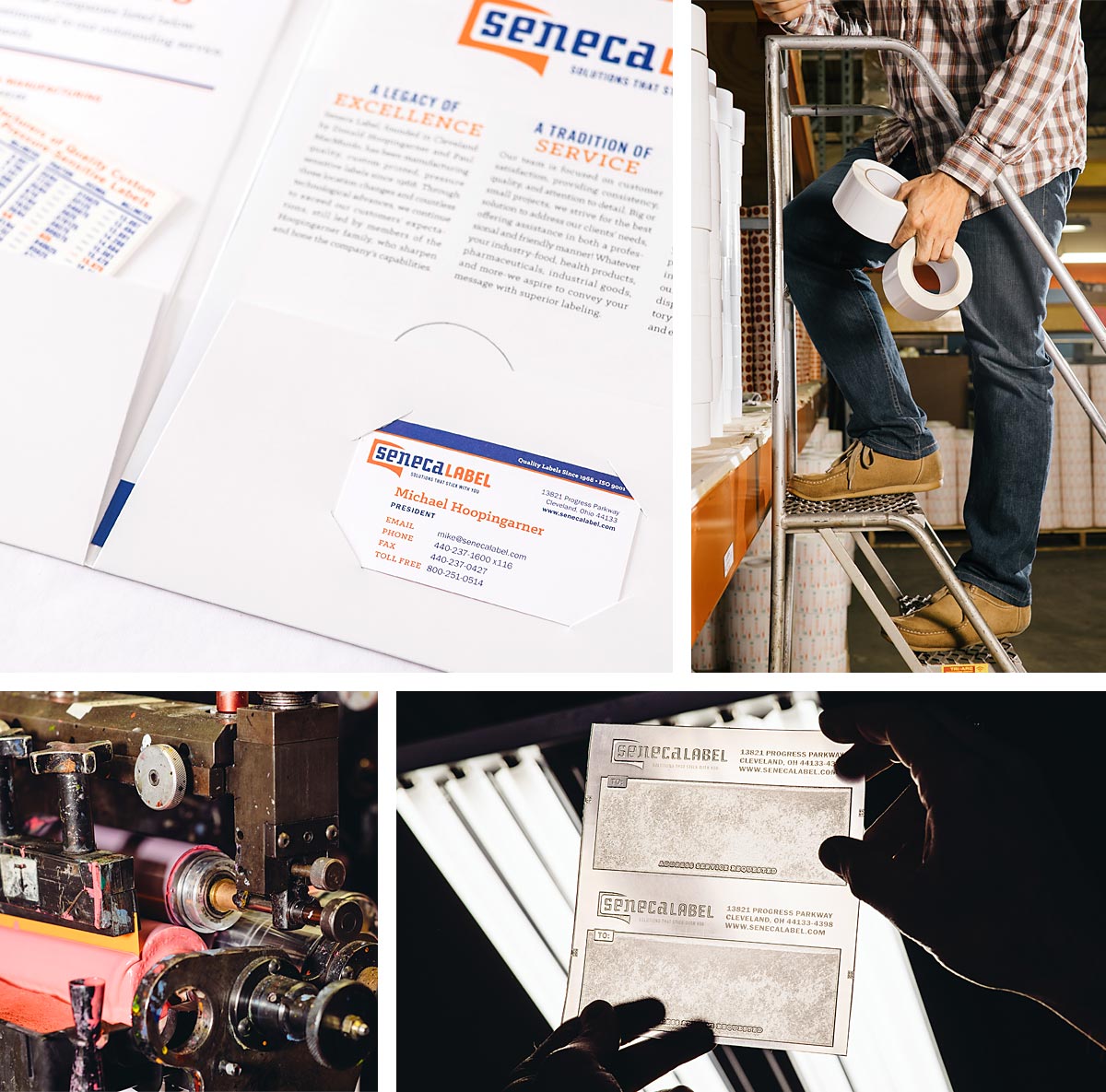 Contemporaneously, we began working on a new logo for Seneca that would play nicely with the illustrations. Various explorations on yielded some bold new brand colors—a blue and orange—and a font type—Addressotype Slab—that were seamlessly incorporated into the illustrations.

With these new building blocks in place—messaging, logo, colors and fonts, illustrations—we dove deep into a revitalizing of the Seneca brand, creating a new stationery package—business cards, letterhead, envelopes. We crafted new versions of their sell sheet. And we undertook the project of updating the nearly five-year-old website, not only with an eye toward incorporating the distinctive brand, but armed with ideas for targeting clients in industries and creating calls-to-action that would result in increased sales conversions. We graced each piece with new and unique photography captured by our staff photographer.

In the end, the project was hard work, but certainly worth the perspiration. Like Seneca, our team at Cassel Bear isn’t afraid of digging in. And loves the opportunity to think holistically about the way your company presents itself to the world.

Whether you’re looking for someone to handle all of your marketing efforts or partner with you on your next project, get in touch. Let’s find out if we are a fit.